If you are looking to get a nose job in London, then Dr Dirk Kremer has the experience to give you the best results. For men, rhinoplasty (nose reshaping) is the most-requested plastic surgery procedure as many feel their nose is too long, too wide or nodular. The technique of rhinoplasty in men is not significantly different from the procedure used in women, however the surgeon should make sure a man's nose is not made too feminine by narrowing the nose tip, or reducing the hump too far. In women in the United States in particular, a snub nose is desired. To achieve a satisfactory result, the surgeon should - as Dr Dirk Kremer does - have enough experience in the field of rhinoplasty to bring a corrective, but masculine result for the male patient.

By surgical correction of the nose, the three-dimensional shape can be changed. A large nose can be reduced, a hump removed, or a clumsy nose can be refined. The "new" nose fits harmoniously now in the face.

Do you feel corrective surgery on your nose would boost your self confidence? If you suffer from problems with nasal breathing, caused either by a crooked nasal septum or large turbinates, this can be significantly improved as part of a functional rhinoplasty. London plastic surgeon Dr Kremer is on hand to advise you.

With open rhinoplasty, an incision is made at the nose bridge and from here the soft skin tissue from the nasal skeleton is replaced. The surgeon gets a good review of the nasal skeleton (cartilage and bone) and can now make the required corrections. The resulting scar in this procedure is small and unobtrusive, but does not completely disappear.

With closed rhinoplasty, the cuts are made inside the nose, where the skin is soft, and the tissue is detached from the nasal skeleton before the appropriate corrections are made. Since the cuts are in the nose, and surgical scars are not visible. The healing is faster and swelling reduced with the closed technique.

Rhinoplasty usually takes 1-2 hours, depending on how complex the individual corrections are to be made.

Patients should be aware that after surgery the nose will be very swollen. When they see their "new" nose for the first time, they may be disappointed by the result and doubt about the correctness of the procedure may arise. This state shall rapidly diminish as the swelling decreases. However complete reduction of the swelling of the nose may take up to six months or longer.

What risks are associated with a Rhinoplasty?

Nose reshaping procedures should always be performed by trained and experienced plastic surgeons, like Dr Dirk Kremer, and in such cases the risks are minimal. In general, a good long-lasting result is achieved, but a 100% guarantee on the surgery can not be made. A possible readjustment may be necessary to realise the high expectations of the patient.

Infection of the wound area is rare. By the use of appropriate antibiotic treatment, any infections can be fully cleared.

Wound healing problems are also rare, but a number of factors can delay healing, such as diabetes, smoking, or clotting disorders.

Numbness in the area of operations can be temporary. It arises as a result of the division of fine nerve branches that become pressured as the swelling presses on the delicate nerve fibres. The sensitivity usually returns back to a large extent, but a possible reduced sensitivity of the nasal tip remains in the long run.

Scar formation after every operation is unique, and difficult to predict. It is possible that the nose drops, and a readjustment may be necessary.

Only after complete swelling and healing can the outcome of the nose be properly assessed.

What to do before the nose reshaping surgery (rhinoplasty)?

It is advisable to plan for some time to recuperate after the operation, and we recommend taking a minimum of seven days off. You should also be fully rested, both mentally and physically. Also, aspirin and similar blood-thinning medications should for their inhibitory effect on blood clotting not be used for two weeks before surgery. For questions and doubts before the nose rhinoplasty, call your surgeon Dr Dirk Kremer.

It is advisable to plan time for around two to three weeks after surgery to recover from the procedure. 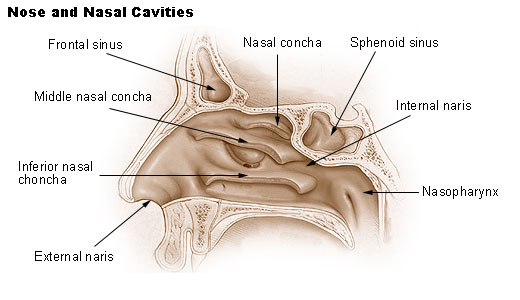 Turbinates: The turbinates are located laterally in the nasal cavities, curling medially and downwards into the nasal airway. Each pair is composed of one turbinate in either side of the nasal cavity, divided by the septum

Where is the surgery?

A rhinoplasty procedure will usually require a two-to-three-day stay in hospital. Post-operative monitoring by well-trained medical personnel is guaranteed.

What is used for anaesthesia?

In general, a rhinoplasty is performed under general anaesthesia. It can also be performed under local anaesthesia, however, the removal of a hump or the narrowing of a nose is often perceived as extremely unpleasant by the patient, so in 3-dimensional changes to the nose, I therefore advise my patients of the benefits of general anaesthetic. Minor surgery on the nose or smaller corrective procedures may be carried out in half-sleep with a local anaesthetic.

Under general anaesthetic, you are asleep throughout the entire procedure. This is certainly the most convenient for the patient and you will be given an article by a specialist in anaesthesia to examine before surgery.

The anaesthetist will be present during the entire procedure to control the anaesthetic. Alternatively, the so-called "stand-anaesthesia is available. It is also controlled entirely by the anaesthetist, they will be calculated not intubated and ventilated.

Details of the surgery?

A rhinoplasty requires a good plastic surgeon and the procedure usually takes between 1 and 2 hours. More complex operations can take a little longer to complete.

In order to perform the desired adjustments, at the beginning of the operation the skin and soft tissue are removed from the cartilaginous and bony nasal skeleton.

For very complicated surgery and very thin skin conditions, the open technique is used such as when cutting the outside of the nose bridge.

If the nose is crooked, you first have to have the nasal septum corrected (Septoplasty).

After straightening the septum the nose cartilage is modelled, and the cartilaginous and bony ridges are removed,and the nose narrowed. Finally, the incisions are closed again and compressing and shaping plaster bandage are created and a nasal splint. A nasal packing can help stabilize the septum and can be inserted into the nasal cavity.

In the first 2-3 days after surgery a swelling of the nose is often experienced, including pain in the wound area and a dull headache. You should rest, if possible, for several days after the surgery. For pain relief analgesic medication will be administered. To keep the swelling after the operation to a minimum, allow yourself as much rest as possible in the first few days. The swelling is usually greatest at the second and third days after surgery, and then decreases continuously.

Initially, there will be a little bleeding from the nose. This is normal and should stop after a few days.

Bruising around the nose and central facial area are typical and individually more or less pronounced. They usually take 2-3 weeks to resolve. Also associated with the operation is numbness of the skin, which will slowly recover.

Nasal packing can be removed between 1-3 days after surgery and rail and skin sutures are removed after 10-14 days approximately. The nose splint is removed for the first time after a week and the patch is changed. Here you can examine for the first time your "new" nose from all sides. Then your nose will once again be glued with plastic strips that are attached for a week. Although the surgical success can be assessed relatively soon after the procedure, the swelling can take months to disappear before the final result can be properly observed.

Do you have realistic expectations regarding the result of surgery? Most patients after rhinoplasty are usually satisfied with the results achieved. However, one must be patient, because the final end result may not be visible for many months. After a successful surgery the self-esteem of many patients is usually greatly increased. It must be noted that in at least 15-20% of cases, the desired result is not reached and a readjustment will be necessary.

Can rhinoplasty be repeated?

Indeed, although the conditions are more difficult after an initial surgery. In many cases, only minimal corrective action is necessary to achieve the perfect desired result. Re-operation should take place no earlier than after one year if it is healed.

Consult with surgeon Dr Kremer for more information on getting your rhinoplasty in London Harley Street.