By 2010 Liposuction was the most frequently performed cosmetic procedure. The most common body parts to be worked upon include the hips, thighs and buttocks. Many people who opt for liposuction have usually tried to improve their problem areas through diets and training plans. One should not forget that liposuction or liposculpture does not facilitate weight loss, but serves to improve your body contours, therefore you should be at optimum body weight as a precondition. Liposuction can help you where there are large accumulations of fat which remain a problem despite dieting and exercise.

Before the operation the body parts to be improved are marked.

The sections and cuts are placed so that they are as inconspicuous as possible.

Then, a substance called tumescence is infiltrated into the fatty deposits. This solution includes analgesics, haemostatic agents (adrenaline), and enzymes that will liquefy the fatty tissue.

Using various needles and canulas the previously injected tumescent fluid with liquefied fat is sucked through the vacuum.

Due to the excellent results with the so-called tumescent technique (wet technology), the dry technique without previous injection of tumescence solution above will no longer apply. Find out more below about VASER lipo, ultra sonic and power assisted liposuction, and check out Dr Kremer's signature procedure, e-lipo.

The loose fat cells mix with the tumescent fluid, which is then removed from the body using gentle suction.

After the surgery, patients are prescribed a recovery regimen to promote maximum skin retraction and smooth results. Your physician may recommend massage therapy to enhance results and speed recovery. 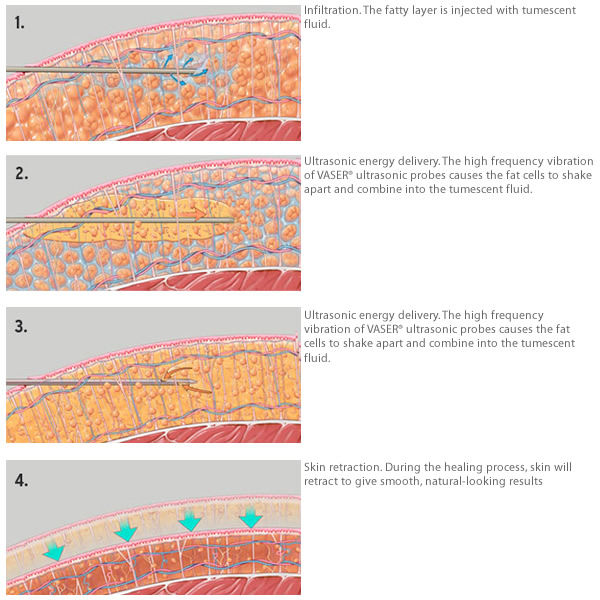 Liposuction is the removal of unwanted fat deposits using a thin needle. In the traditional manual technique of liposuction, a cannula is inserted through small incisions in the unpleasant pad on the stomach, hips, waist or legs, etc. The needles connected to a hose using a vacuum the fat cells are extracted. liposuction is no substitute for diet or exercise, the goal is the removal of stubborn fat deposits in different regions of the body.

What is ultrasonic liposuction?

In ultrasound-assisted or ultrasonic liposuction, a specialized cannula is used which transmits ultrasound vibrations within the body. This vibration bursts the walls of the fat cells, emulsifying the fat (i.e. liquefying it) and making it easier to suction out.

A disadvantage of the ultrasonic application is the heating of the tissue, which can cause burns to the tissue.

What is Power Assisted Liposuction?

The third and newest technology in liposuction, developed in recent years and increasingly gaining ground is called Power-Assisted Liposuction (PAL). The oscillating needles used glide through the adipose (fatty) tissue. As with a an electric toothbrush the needles at short distances 1 to 2 mm in front and back. In this way, the fat cells gently are removed and the healthy tissue is not violated. Since less mechanical force must be applied to reduce the unwanted fat deposits, sensitive body areas are treated very well. At the same time resulting in a more effective procedure, and for the patient shorter operation times and a quick healing.

Am I a candidate for liposuction?

The best candidates for liposuction are people with relatively normal weight isolated fat deposits in specific body regions. It is also important that he or she have a fixed or elastic skin that can be adapted after liposuction to the body shape. Whether that is true for my skin, you should discuss in a detailed consultation with your treating physician.

Liposuction is a very safe method that has already been used thousands of times. It is important that that is performed by a qualified doctor such as Dr Dirk Kremer, allowing you to pick through their expertise, and discuss the appropriate liposuction for you.