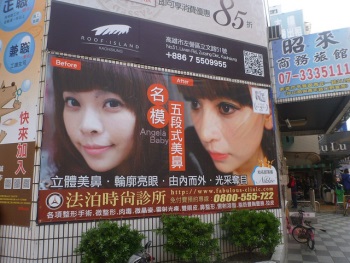 Our sense of identity is what defines us and makes us individual, and we express this unique concept of who we are through the image that we present to society every day. We accomplish this in a number of ways: the use of language, the prominent display of a specific country's flag, or the use of religious symbols and clothing to indicate a particular cultural, national or religious identity.

While many people are happy with variable, temporary options such as clothing, or an alternate hairstyle to change their external appearance and help to project this sense of identity, some people turn to plastic surgery as a permanent means of altering their looks, and how society views them as a result. The plastic surgery industry is often represented in the mainstream media with stories of extreme examples of cosmetic procedures which can often obscure topics that require a delicate, measured approach. One such topic is that of ethnic plastic surgery, an increasingly-popular field in which patients turn to plastic surgery as a way to alter their physical appearance, sometimes even removing the features that indicate a particular ethnic background.

The discussion surrounding different cultural approaches to plastic surgery is a particularly sensitive one, and as such it is important to remember that all cultures have different norms and values, including varying attitudes towards beauty, and more specifically, plastic surgery. As has been reported in recent months, a burgeoning ‘lunchtime’ cosmetic surgery market has found a home in Asia, providing patients with quick cosmetic procedures that allow them to return to their place of work within an hour. While it’s important to ensure that these procedures, should they remain popular, are only carried out in a safe environment by a licensed plastic surgeon, it raises a potential issue when people turn to these quick-fix procedures to hide their ethnicity and fit a more ‘Westernised’ beauty ideal.

The media coverage of this topic intensified in July of this year, when Maureen O’Connor published an article in New York Magazine. In this article, she described her encounter with a plastic surgeon who assessed her facial features, and who considered the Caucasian features she inherited from her father to be more desirable than the Chinese features inherited from her mother. As a result, the surgeon recommended an Asian blepharoplasty procedure to create a ‘double eyelid’ fold, a feature prominent in Caucasians, but not Asians. Despite her experience, however, O’Connor insists that news of Asians getting surgery to resemble Western celebrities are greatly exaggerated, but spread quickly through Western media outlets, resulting in a misunderstanding of why people decide to undergo cosmetic surgery.

According to the American Society of Plastic Surgeons, the number of cosmetic surgery procedures being performed on Asians continues to increase, but not as a way of altering their ethnic appearance. Indeed, as the idea of plastic surgery becomes more mainstream in the Asian community, patients are actually increasingly choosing to enhance their natural look through surgical means. Ethnic plastic surgery is not undergone in an attempt to look more ‘white’, nor as a means of modelling your appearance on particularly Caucasian features (or if it is, it is very much the exception, not the rule), but simply because members of that community are choosing to improve their natural features as plastic surgery becomes an increasingly acceptable option, just as we do here in the UK, and in America.

Blepharoplasty is one of the most popular procedures in the Asian community, just as breast augmentation is the most popular procedure in our own culture, and whilst double-eyelid surgery may be a procedure that is more common among this particular ethnic group, that is in large part due to ‘monolids’ being a uniquely Asian feature. This doesn’t mean that members of the Asian community are only getting eyelid surgery; they also choose to have liposuction, tummy tucks, or facelifts, though these surgeries aren’t reported in the media because they don’t represent the controversial idea that patients are trying to achieve a more Western look. There are many reasons to get plastic surgery: health reasons, a desire to improve your quality of life, to look younger, or to feel better about yourself, to name just a few. However, it appears that choosing surgery as a way of removing a typically ‘ethnic’ look is simply not as popular a choice as the media would have us imagine.

If you’re considering a cosmetic treatment then please contact us to arrange a consultation and we’ll be happy to discuss the surgical options available to you.